World Translation Center can provide professional Farsi translation services for English to Farsi and Farsi to English. We can also translate Farsi to and from over 150 other languages, including all the principal languages of Europe, Asia, South America, the Middle East and a wide range of African languages, at competitive prices.

Our Farsi specialists will be able to provide translation for virtually any project you might have, including marketing materials, technical, financial, legal and medical documents, websites and software. Our skilled project managers will match your project with a translator team best suited for the area of expertise needed. Every linguist works exclusively in his or her own mother tongue and within his or her area of expertise guaranteeing not only quality translation, but proper localization as well. After each document is translated, it will be edited and proofread by another professional Farsi translator to assure maximum quality.

We also make available transcription, video recording and subtitling services. In the event that you need to have an existing video dubbed, a commercial narrated or a telephone system recorded, our native Farsi speakers are available to provide high quality voiceover services.

We pride ourselves in delivering high quality cost-effective professional Farsi translation services, whether your project is small or large, simple or highly complex.

Farsi or Persian is the official language of Iran, Afghanistan, and Tajikistan.

Dari or Dari Persian, also known as Eastern Persian, is a historical name for the Persian language and, in contemporary usage refers to the dialects of the Persian language that is spoken in Afghanistan. As defined in the Constitution of Afghanistan, Dari is one of two official and national languages of Afghanistan. Dari also serves as the lingua franca in Afghanistan. (Lingua franca is a language used to communicate between persons not sharing the same mother tongue, in particular when it is a third language, distinct from both persons' mother tongues.)

Persian has been a medium for literary and scientific contributions to the Islamic world as well as the Western. It has also had an influence on certain neighboring languages, particularly the Turkic languages of Central Asia, Caucasus, and Anatolia, as well as Urdu, Hindi, and other Indian languages. It has had a lesser influence on Arabic and other languages of Mesopotamia.

The official language of Iran is sometimes called Farsi in English and other languages. This is a correct transliteration of the native name of the language, however many, including the ISO and the Academy of Persian Language and Literature, prefer the name Persian for the language.

Persian makes extensive use of word building and combining affixes, stems, nouns and adjectives together to form new words. Because of such word compounding, Persian can derive over 200 million words.

There are different varieties of standard Persian:

Modern Persian is the variety of Persian spoken in Iran.

Dari is the local name for the Persian language spoken in Afghanistan and Uzbekistan.

UnisPers or Universal Persian, is a method of writing Persian with the Latin alphabet developed in Iran during the 1950s. The chart shows the letters used to write UniPers, together with their equivalent Persian letters. . 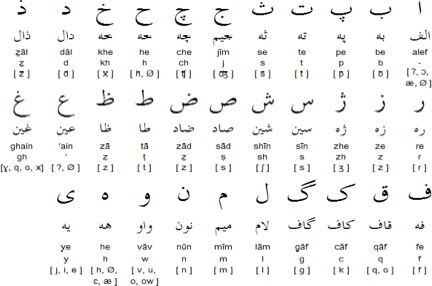