World Translation Center supplies professional Hebrew translation services for English to Hebrew and Hebrew to English. We can also translate Hebrew to and from over 150 other languages, including all the major languages of Europe, Asia, South America, the Middle East and many African languages, at affordable prices.

Our Hebrew experts will be able to provide translation for virtually any project you might have, including marketing materials, technical, financial, legal and medical documents, websites and software. Our professional project managers will match your project with a translator team appropriate for the area of expertise needed. Each linguist works solely in his or her own mother tongue and within his or her area of expertise insuring not only top quality translation, but proper localization too. After each document is translated, it will be edited and proofread by a second professional translator to guarantee highest quality.

We also render transcription, video recording and subtitling services. In the event that you need to have an existing video dubbed, a commercial narrated or a telephone system recorded, our native Hebrew speakers are available to supply high quality voiceover services.

We pride ourselves in providing quality cost-effective and professional Hebrew translation services, whether your project is small or large, simple or highly complex.

Hebrew is a Semitic language of the Afro-Asiatic language family. Modern Hebrew is spoken by more than seven million people in Israel, and Classical Hebrew is used for prayer or study in Jewish communities around the world. It is one of the official languages of Israel, along with Arabic. Hebrew is the language of the Bible and the Old Testament of the Christians. It is thought that Hebrew gradually became extinct as a spoken language around 200 AD, but has continued as a written language for many centuries thereafter. It was used to write books and documents in a variety of fields, including religion, law, business, philosophy, literature and medicine. The core of the Hebrew Bible, the Torah, traditionally believed to have been first recorded in the time of Moses 3,300 years ago, is written in Classical Hebrew.

Hebrew was revived as a spoken language during the late 19th and early 20th century as Modern Hebrew, replacing Arabic, Yiddish, Russian, and a variety of other languages spoken by Jews who emigrated to Israel.

Yiddish is written and spoken in Orthodox Jewish communities around the world. It is a home language in most Hasidic communities, where it is the first language learned in childhood, used in schools and in many social settings. Yiddish is a non-territorial high German language of Jewish origin, written with the Hebrew alphabet as opposed to a Latin alphabet.

Hebrew is written from right to left in horizontal lines. There are no separate numerals in Hebrew, instead standard western numerals (1, 2, 3, etc) are used.

Entire documents need to be reversed, including pictures, financial columns, page numbers, captions, etc. Desktop publishing can only be done by a professional with a Hebrew operating system. Translated documents will be delivered as PDF file, formatted brochures, newsletters or posters as high resolution PDF, ready for printing. 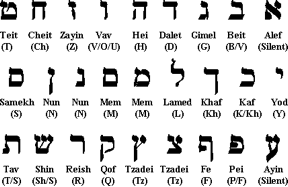