World Translation Center delivers professional Tamazight translation services for English to Tamazight and Tamazight to English. We can also translate Tamazight to and from over 150 other languages, including all the principal languages of Europe, Asia, South America, the Middle East and a variety of African languages, at economical prices.

Our Tamazight specialists have the ability to provide translation for virtually any project you might have, including marketing materials, technical, financial, legal and medical documents, websites and software. Our knowledgeable project managers will match your project with a translator team most appropriate for the area of expertise considered necessary. Each individual linguist deals solely in his or her own mother tongue and within his or her area of expertise insuring not only top quality translation, but proper localization as well. After each document is translated, it will be edited and proofread by a second professional translator to assure highest possible quality.

We also furnish transcription, video recording and subtitling services. If you need to have an existing video dubbed, a commercial narrated or a telephone system recorded, our native Tamazight speakers are available to provide high quality voiceover services.

We pride ourselves in supplying high quality cost-effective Tamazight translation services, whether your project is small or large, simple or highly complex.

Tamazight is an indigenous language of North Africa, which belongs to the Berber group. There are various closely related languages and dialect all spoken west of the Nile.

There is a movement among speakers of these closely related northern Berber languages to combine all dialects into one standard language.

Tamazight traditionally referred specifically to central Morocco, but is also used by native speakers of Riff, or Tarifit. It is being increasingly used for Standard Berber. Its usage is less consistent in some areas like the Kabylia where locals call their language Taqbaylit rather than Tamazight. Due to the rising Berber cultural and political activism in the North African media, the popularity of the term Tamazight is now recognized by virtually every citizen in North Africa, including non-Berber speakers.

The Berber languages have had a written tradition for over 2,000 years. It was first written in the Tifinagh alphabet, which is still used by the Tuareg today. A modernized form of the Tifinagh alphabet was made official in Morocco in 2003, and a similar one is used in Algeria. The Berber Latin alphabet is preferred by Moroccan Berber writers and is still predominant in Algeria. Mali and Niger recognized the Berber Latin alphabet and customized it to the Tuareg phonological system. However, traditional Tifinagh is still used in those countries. Both Tifinagh and Latin scripts are being increasingly used in Morocco and parts of Algeria, while the Arabic script has been abandoned by Berber writers.

Since September 2003, the Tifinagh alphabet children in Moroccan primary schools have been taught to write Tamazight with the Tifinagh alphabet. It is also used by the Tuareg, particularly the women, for private notes, love letters and in decoration. For public purposes, the Arabic alphabet is normally used. 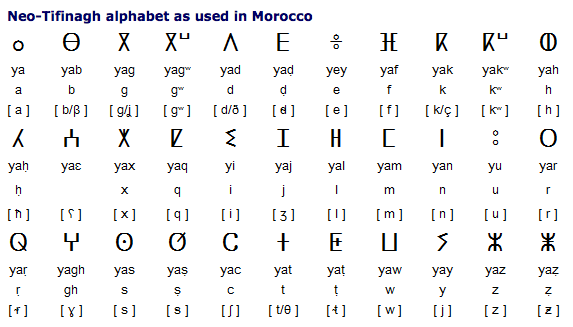